My good friend and tuner Rick Salmon and I showed up at Mid Ohio Sports Car Course early Friday morning to find the Flying Thruxton unloaded and waiting to be prepped for practice. After looking the bike over and running it through AMA/Wera technical inspection, we were ready for some laps on the new circuit.

Unfortunately, the track was wet from an overnight rain but after two sessions a dry line was forming… in places. The course at Mid Ohio is a funny surface. There are so many patches and repairs, it’s hard to tell if the track is wet, dry, slick or sticky. The only way to know in some spots is to lean over and see if you get grip.

After three sessions, I felt pretty far of the pace and a little light on confidence. Of course Rick’s assessment of the track was that it is a “confidence course”. I was definitely getting faster but could not seem to get comfortable with the lack of stick I was feeling from the tires. I ultimately ran two more sessions and tried to hook up with some faster riders but just couldn’t quite hang on to the tail of the pack.

Friday night, we found a restaurant just up the road from the hotel, had a couple drinks and talked about lines, tires, and braking points; among other vital issues going on in the world. As soon as we were done with our food (and a couple double Maker’s) my phone rang. It was Rich Schurfeld, my Colorado/Ohio buddy that has fortunately ridden thousands of laps around Mid Ohio. We spoke for a good 30 minutes about some of the technical details involved with getting around the track.

Apparently, Rich could sense my need to find an edge and he drove out from Toledo (2 hours) to meet us on Saturday morning. Saturday started out totally dry and would remain that way. We took some air out of the tires to run them a bit hotter. I took Rich’s advice and after 2 sessions on Saturday morning, I felt like I moved into the zone and wasn’t getting gapped by the rest of the riders.

My first actual race was on Saturday afternoon and would act as another practice session in preparation for the Thruxton Cup race. The green flag flew and off we were. We got deep into the first lap and as we entered Thunder Valley for the first time, the officials threw a red flag ending the race. We were directed to head to our pits from the hot pit lane. This usually means there is a big mess to clean up on the track and it will take enough time that they don’t want us all sitting in the hot pit. As it turns out, Paul Canale, our teammate for the weekend, crashed his Thruxton in turn 1 a couple bike lengths behind me on the first lap and collected a couple other riders on the way down. Luckily, no one was hurt and Paul was able to get the bike back in shape while I went back out to restart. This “warm up race” seemed to do the trick and I felt good about our set up coming off the track after that LW Twins race. We added some fuel, looked over the bike, and put warmers back on the tires.

And then the Thruxtons took the grid… Bam, go time! I wound up with a front row outside grid spot; the best starting spot at this track if you ask me. I was first through turn one and led the whole first lap. I got passed on lap two and while the two of us chased each other around, we wound up gapping the rest of the field by a fairly good margin. After about 4 or 5 more swaps for the lead, I found myself leading into the last lap. I knew where the other rider was going a bit faster than me so protected that spot when we got there and held my lead going into the back half of the last lap. I felt like if I could get into that section in front, I should be able to stave off a last minute pass attempt. I was not far enough in front to be comfortable with that plan so I kept my head down and the gas on. Coming out of Thunder Valley, I saw two bikes on the horizon. We were coming up on a rider that would be lapped and another rider that was exiting the track. I ultimately met them both entering the last turn, which is key to a good drive down the final front straight where the checkered flag would be waiting for one of us. I timed it just right and split the middle of the two riders, stalling just slightly as I cut back into the turn in front of the lapped rider. This was in hopes that I could get him between myself and my pursuer. The other guy wound up making it though anyhow but was not able to get a good enough drive out of that turn and ultimately had to settle for 2nd place.

I come home with the #1 award and some fun stories to save for next time, a lead in the Thruxton Cup series, and a solid 2nd place in the WERA National points’ race.  Miller Motorsports Park, here we come to try and shore up the lead in both! 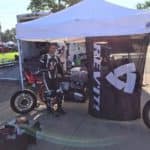 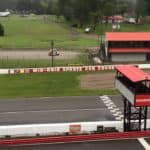 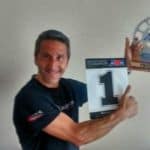 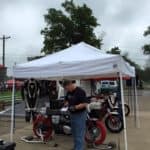 0 comment(s) so far on Victory at Mid Ohio