It seemed like a great idea at the time, escape the rain and dreariness of an almost completely rained out month of May here in Colorado and head to the desert. Good people, great riding and a healthy dose of much needed vitamin D was the plan. We thought we would dovetail our escape with the official Motos in Moab event; however, events would conspire against us.

The original subject of this entry was to document the official event. However, it quickly became evident that we were not going to attend the overbooked event – sometimes poor planning actually pays off. Our “participation” was limited to a few of the Erico crew rolling into the relocated event site, situated in a flood plain along the angry Colorado River for all of ten minutes. At that point a Plan “B” was quickly hatched.

As I stated sometimes poor planning pays off. Never under estimate the ability of Erico Motorsports to throw a good party, regardless of the situation. Once we realized our official Motos in Moab participation wasn’t going to happen, we quickly found alternate accommodations (a big shout out to my Bro, MW, for actually finding us a place to stay over Memorial Day weekend). A core group of employees and customers emerged and plans were hatched. Originally we were going to leave Denver in two waves on motorcycles and meet up at our condo. Once again Mother Nature dealt us a bad hand and instead of riding, several of us opted to trailer our bikes. The brave ones including Shelby, Jamie, Jordan, Mike, Quinn and Mike sacked up, endured sub-freezing temps, questionable road conditions and made the five plus hour ride. Nicely done.

As hoped for (actually prayed for by yours truly) the morning dawned sunny and cloudless. The sun at last! Even after riding through all kinds of crappy weather and freezing temps everyone was stoked to go for a ride. The first route that came to mind was Arches National Park but that idea was quickly discarded in lieu of a less crowded option. Luckily LaSalle Pass was suggested and quickly accepted. What a great ride! The scenery was spectacular with cows roaming free and beautiful vistas. However, the road up the pass was crumbling and it quickly became clear to all involved that we needed to be on our toes the entire time. Despite the challenges of the road, we were still able to enjoy the beautiful scenery. During our lunch stop plans were made for an afternoon ride, but good food, beer and a couple of punctures conspired against us. No matter, the pool and cocktails and a delicious dinner awaited us after a great ride. As the all-too-short weekend drew to a close we reveled in each other’s company and began talking about a return in the Fall. Whether those plans will materialize is anybody’s guess. But one thing was certain we all had a great time.

Post Script: The original intrepid six were down by one thanks to mechanical gremlins. However, it sounds like the ride back for the Mikes + Quinn might be good material for another Blog post. The weather also held for the most part, although storm clouds and lightning rolled in Sunday night or it could have been dust from brake “burnouts” and camera flashes. We’ll probably never know for sure. A big thank you to John and Tai Beldock from all of us. Without your generosity this trip wouldn’t have happened. 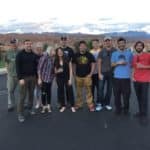 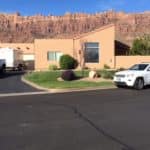 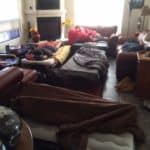 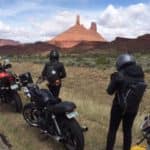 0 comment(s) so far on Erico Motosports in Moab